In the weeks leading up to race day, on my solo long rides and runs, I rehearsed and visualized the following post as encouragement to get me through the toughest moments of Ironman –

“Those who know me best know I’m not the fastest but that I work hard and if I can show that hard work pays off then it’s a huge victory to me.  Today I had that victory with a (PR, sub10, Kona qualifier…).”

It may be difficult to understand my disappointment with a 10:14.  To most it seems like a great time, after all it was a PR.  My frustration lies in what has escaped me the last two attempts, which is very simply a race executed to plan, void of injury and indicative of my ability in the distance.  It’s hard to express the sacrifice that goes into a single race and the significance that a minute or less can make after nearly 10 hours.  It’s routinely setting the alarm to 5am, passing on opportunities to spend time with friends and family, sipping water at a party then leaving early to prepare for an 8 hour workout, choking down fish oil pills, drinking the same smoothie morning after morning, getting to bed by 9:30pm, being broke from race/coaching fees, equipment, travel expenses and supplements, existing in a state of pure exhaustion, day after day, month after month…  And from all that I just described it may make no sense at all that a person would continue with such a debilitating activity except for the opportunity at a single moment of realization that all the hard work and sacrifice was worth it, substantiated with a crossing of the finish line, shared with family and friends.

I’ve been actively involved in sports from the age of 5 but now 25 years later I have never been overcome with emotion from an athletic accomplishment, the type of response that only occurs at the pinnacle of achievement.  You may not know what that looks like but I do.  I have seen it on the faces of Ironman Champions as well as those crossing just before midnight.  I witnessed it in tears Monday morning at rolldowns and have read about it in race reports.  Some people act like it’s not that big of a deal, but to me it REALLY is a big deal!

In 2013 I was hoping for that moment, again in 2014, but the sad thing is after a near year of commitment I realized taking my first steps out of the water that it wasn’t going to be my day (Race Report below).  The silver lining in my 2014 story is you don’t leave your fitness at the finish line or the work ethic and character you’ve built along the way.  A very significant distinction that I’ve come to understand recently from my Swim Coach Gerry Rodrigues is the value and significance in the struggle which he describes as virtuous –

“Something that lends itself to building whom we are whereby the ends does not justify the means, rather the means justifies the virtue.” – Rodrigues

I respect and admire this characteristic in those I have been fortunate to meet through this sport and hope that it is something I can continue to build within myself through my efforts in the coming years.  I promise to have my Ironman before it is done and look forward to sharing that moment when it happens.

I’ll keep this short.  The plan was to treat this Ironman like any other workout, targeting 147bpm on the bike and 157bpm in the run (top end Z1).  The goal was to complete the swim without much effort, finish the bike feeling strong and only test the legs after 18 or so miles if they felt good.  I’ve come to understand that a solid Age Grouper Ironman isn’t about going ‘fast’, it’s about maintaining a steady pace.

The swim was only one loop, a first for me, and race morning was perfect conditions for a new IM swim PR.  I watched the pros race into the water from shore for position but decided I would just ease into my swim, not risking any issues from going out too hard.  I was able to draft feet for the entire duration.  Any time I tried to break away the effort seemed not worth the slight improvement in place so I kept it pretty mellow.  The one huge benefit from all the sighting I’ve practiced this season, both in pool and open water T26 workouts was being able to easily identify position in the water and maneuver into the right draft packs.  The benefit of increased swim volume in 2014 wasn’t my resulting 1:03 (7 min PR) but being able to cruise through a near one hour swim and feel like the race was only beginning on the bike.

Things went south the moment I stepped foot on land.  I was happy to see a big swim PR on my watched but immediately felt my right glute seize up.  There was an 800 meter barefoot run from the swim exit to transition so I tried my best to go slow but with each step my glute tensed up more.  By the time I got onto the bike I was in the same place I have found myself at Vineman, Placid the year before and Muskoka before that.  I figured I would try to work through it, after all in Ironman you don’t really have an alternative other than to keep going.  My power was crap for the first hour or so, easily under 200 watts.  About 30 miles in at the first turn around a fellow QT2 athlete rode by me and said “nothing but another glorified Z1 ride”.  I looked down at my Garmin to see that my lap HR was over 160bpm!!!  That’s higher than my 70.3 target, but my power was still barely 200watts!

I suddenly had to make the decision whether to follow the plan and bike a 6+ hour split or try to pick my power up and inevitably die.  The purpose of very specific HR targeting isn’t to just manage effort but to allow your body to metabolize fuel at a rate it is accustomed to.  Maintaining 160+ bpm for 5.5 hours is a sure fire way to commit suicide before a marathon run and expectedly so I ended the ride feeling exhausted and on the verge of cramping.

There was a brief period where I thought I could turn everything around with a near 3 hour marathon.  I started out with 7:30’s and lowered those to 7:15’s on the flat and covered bike path.  Everything felt bad but manageable for the first 10 miles or so.  I saw fellow T26 swimmer and pro athlete Matt Russell early and then my buddy Dave Hansen frighteningly soon after.  At the turn around I calculated I was 30 minutes behind, a gap I wouldn’t make much up on.  One funny yet painful moment was the beautiful finish into town where I was passed by a 40 year old and decided to sprint neck-and-neck the last 200 meters into the shoot.  I realized after how foolish this was considering we were in different age groups and probably had different swim wave starts times anyway, but that competitive nature kicks in and before I knew it the race was over without me really experiencing the finish line celebration. 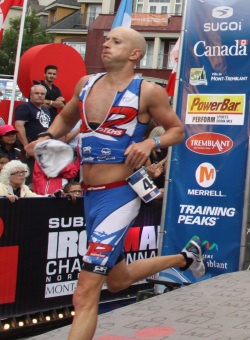 3 amazing aspects of this race were first) the awesome performances of multiple friends who were there racing with me.  Both college roommate and UB XC teammate Dave Hansen and Tim Maxon went under 10 hours (9:50 and 9:40 respectively) and missed Kona by one spot, Maxon by only 16 seconds.  Facebook Training partner “Mr BOOM” Scott Rausenberger went under 11 in his first and old Buffalo teammate Stevie crushed a new PR.  It was nice to be able to experience their accomplishment.  Second) the beautiful venue.  It rained all the way up until race morning but the weather ended up being perfect (minus the wind), the landscape distracting and the volunteers super energetic.  Finally and most importantly the support of my family was beyond spectacular.  My mom drove up to cheer me on as she has in every Ironman I’ve done, My big sister Kate made breakfast and wished me luck in Boston, and my youngest sister Laura stepped up BIG time driving from Albany to Boston and up to Tremblant (through customs twice) before back to Albany, including a 5am airport drop off.  I literally couldn’t have done the race without her and the moments I found my mom and sister cheering on the course were the best parts of my day (always smiling in pictures despite the pain).

The notion of balance continues to elude me.  I’ve used the excuse that I’ll enjoy myself more once it’s over but ‘it’ remains to exist in the future, placing great pressure on and allowing one event too much control over my life.  Recently I’ve become NO man, the opposite of the Jim Carry movie, passing on fun so that I can spend all my time training and for what?  I’m not a pro and triathlon isn’t all that matters, far from it!  The goal isn’t to be the best athlete but to bring more joy into your life than existed without it.  I’ve got one more block left in me before 2014 is over but with the following necessary changes –

Reduce Volume – 27 hours is too much for an age grouper, physically and mentally.  Yea I can make it work, but there’s no time for anything else.  My good friends Tim and Dave both dropped sub 10’s this past weekend on high teens.  I have reservations about the value added over 20 hours and in order to enjoy life especially will institute a hard cap of 22, aiming to keep 20 or under on builds.

Enjoy Life – Instead of passing on invitations I will accept at the cost of workouts from time to time.  The worst thing I’ve learned is trying to enjoy ones self with a difficult and early morning looming in the back of your mind.  It’s necessary to commit to fun or the workout and also ok to accept a lessor performance.  This has always been a struggle for me but I know I can do better.

Fix the Freaking Glute/Back Issue!! – A chain is only as strong as it’s weakest link and mine is my back.  I spend so much time building the machine but am limited on race day by the same reoccurring issue I’ve had at all A races over the last 3 years.  This past season I tried to combat it with massage sessions and some stretching/foam rolling.  I NEED to make this my #1 priority moving forward or else I can’t complain about the result.  If 5 hours of workouts need to be substituted for 5 hours of stretching and foam rolling so be it!  Most importantly I will see a sports specific PT for a diagnosis so that I can have the peace of mind knowing I’ve listened to a professional.

Strength and Flexibility – Related to the back problem I want to spend more time in the gym working on strength and pick up some Yoga or other flexability/Prehab class.  I’ve got these bird legs which distinguish me from the rest of the competition and not in a good way.  My largest gap to fill is the bike AND I really enjoy strength sessions.

Family/Friend Time – I need to be better at making time with family and friends a priority.  A whole year passes by way to fast these days.  This has to be my #1.