I began my dating app experience much later in life than the rest after the foolish decision to buy a Windows phone set me back 2 years.  Watching all the connections and hearing stories, good with the bad, I was anxious to get started the moment I upgraded devices.  First and most obvious download was the infamous Tinder, renown as a hook up app but also responsible for significant relationships for several of my friends.  Though I have played around with dating sites in the past like Match.com I felt like a stranger entering new waters with this one.  Here’s take #1 –

Crickets…  I began like a kid waiting on Santa, checking my phone repeatedly the first hour, but days and weeks went by with only tiny bites.  When I started I would search through countless profiles looking for attributes I thought matched my interests but after only a short time I found myself swiping right, often without even looking, on every profile until no one was left in my area.  My original search criteria was girls between 27-31 years of age within a range of 3 miles but over time those standards relaxed to 21-35 years of age within 10 miles.

I was becoming down and frustrated with my initial failure until I brought it up to a female friend who offered to look at my profile and provide some tips.  She quickly started searching through my FB pictures updating my images and addressing my description.  She opened with height (6’-1”) claiming ‘no one likes to date a short guy’, then mentioned good career because ‘no one likes a cheap skate’.  She changed interested in triathlon to “elite athlete” and concluded with adventurous and outgoing.  I felt like some of the info could be construed as misleading but in my better interests allowed it.  When I viewed her image choices I noticed all the ‘nice guy Dave’ pics were replaced with athletic shots, the majority not even showing my face, but again I decided as a girl she would know best and permitted it.

Side note – as a female my friend is an attractive girl and when yielding my phone couldn’t grasp the difference between the sexes when it comes to swiping left/right.  She seemed confused after being selective with her first few choices and getting no matches.  I had to explain to her that it takes work.  This could be me but I’m guessing it’s a greater trend between males and females on all sites (apparently there are 99 men for every single available female).

So the next morning I woke up to see something shocking, I had 5 matches on my phone!!  My productivity had grown by 10,000%!  In addition there was something I had never seen before, a message in my inbox, the first time a female had broken the ice.

There are tiered levels of success and I won’t just throw myself under the bus at every opportunity, but present day matching isn’t as big of a deal as I make it out to be.  It’s not so hard to get a connection, but from those matches to get a response, continue with a conversation, get a number and then make it out on a date.. the chances of success go down compoundingly.

So for the rest of this recap, to protect the name of this particular female (although she doesn’t deserve it) I will refer to her as Hollywood.  Hollywood’s message read out like this –

The conversation continued with some small talk over the next day or so when she through me a curve ball.  She asked for my Instigram, which I agreeably sent her, and through connecting I got to see hers.  It was full of images in underwear and bathing suits in racy and suggestive poses.

I asked her what that was about to which she responded she was an actress and model including some underwear adds, but nothing objectionable.  My immediate thought was uhh ohh, RED FLAG, RED FLAG, but I decided, against my better judgment, that it would be wrong to dismiss her just because of her looks.  After all, she was the one who contacted me first and had been doing most of the initiating.  The following is what continued up to the promise of a first date –

What was very obvious to me at the time yet I hesitated to bring up is that working in El Segundo and living in Santa Monica meant making it to Beverly Hills on a weekday would be absolute torture.  I didn’t want to miss out on a person to person opportunity, but for anyone who’s lived here or seen The Californians on SNL knows that traffic is no joke and that the route I would have to take is worst case scenario. Never the less, against my better judgment I decided it would be worth the struggle for a potential connection.

I ran out the door of my office at 4:55pm and headed home to Santa Monica, checking Waze on my route to see if I b-lined it home I would have 7 minutes to eat before heading to Beverly Hills if I wanted to make it on time.  Distance to location – 21.9 miles, Drive time – up to 2 hours 10 minutes. 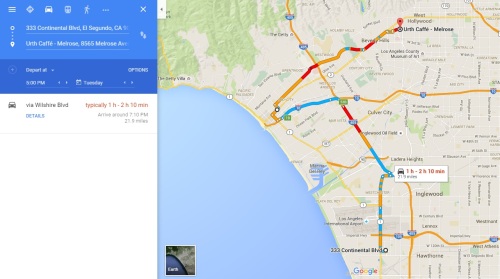 To pass the time I called a friend from back east who I had lived with and gone on numerous “dating opportunities” including countless late nights at our home bar Thirsty Buffalo with a 4am last call, the most desperate “dating” hour being between 3 and 4am.  We caught up for a while and before I knew it 2 hours in the Jeep had flown by.  I finished by telling him that I was seeing a model actress, and joked about never knowing in LA.

I found parking, made the walk and ended at Urth with 10 minutes to spare to the following message – 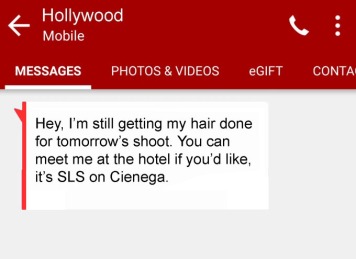 To which I agreed.  It was a 30 minute drive or 20 minute walk so I decided to keep my parking and meet her.  I reached the hotel and messaged her back. 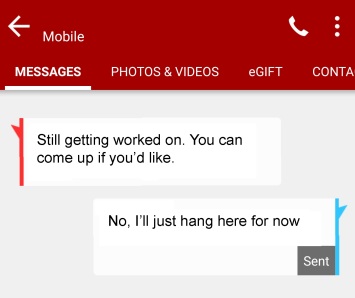 15 minutes later (about an hour and a half since I arrived in BH, over 3 hours since I left my job)..

When she finally arrived I could see right away she looked good, not amazing but like her photos.  I complimented her hair and went in for a friendly hug.  Leaning in with her shoulder she responded with a light, impersonal and slightly awkward embrace.  She looked at me and said “you look nothing like your pictures!”, to which I responded “you mean in a good way I hope”.  She just looked down.  I asked if she wanted to go back to Urth.  She said “you’re welcome to walk back and I’ll meet you there” which I now realize was her first try at an exit strategy.  I suggested we just stay in the lobby and that I’d buy her a drink.  I began small talk asking why she’s new to Tinder.  She said –

Well I just broke up with my boyfriend, actually we broke up last month, but just stopped sleeping together this week, like yesterday.

Ok…  (I tried to respond and work through the awkwardness)  What’s it like being a model in LA?

I need to stop things here and let you know I have no interest in you.  I’m looking for someone a bit more…

She just smirked and looked down.

Well I guess I’ll just walk back to Urth.

Why don’t you do that.

On the way out she decided to twist the knife one more time.

What’s it like dating on Tinder?  You think I’ll find anybody nice?

By the next day I had 50 responses.  A few light heartedly poked fun, most were apologetic, but what I picked up on were the number of messages claiming similar experiences.  Dating can be fun and miserable at the same time and I have been fortunate/unfortunate enough to have known the full spectrum over the last 10 years or so.  I don’t look forward to the bad experiences but I hope to learn from them.  Meeting Hollywood taught me it’s ok to sometimes judge a book by its cover, out of self-preservation.  That might sound wrong but in the context of dating in LA it’s often what works.  I recently had a day at the Bungalow where a friend suggested I introduce myself to her friends who were high profile model/actress types.  I should have known better but I continue to fall for it every time.  It’s not a matter of good or bad just different and I’m learning if you want to find like-minded individuals with similar interests you need to walk in the same circles, and never go searching at places like the Bungalow.  However this may be another example of “do what I say, not as I do” as I’m sure to be back in the same places playing the same game, attractive people being the curse and benefit of living in the heart of beauty and superficiality.