Biggest take away from this past weekend “perhaps you’re stronger than you think”.  It’s easy among the monotony of balancing Ironman overload with a full-time job and attempting to maintain a reasonable social life on top of it to question “am I fit” as feelings of fatigue and mental burn out start creeping in.  I get in my own head better than perhaps anyone else I know, but this weekend was all about turning off my mind and letting my body do the talking.  I’m not in love with a flat course 1:29, but realize that coming off a 200 mile bike and 30 mile run weekend it’s probably appropriate.  Hunting down the few age groupers ahead reminded me why I love this sport.  The thrill of the chase and confidence of knowing you are well prepared to finish strong make all the hard work and sacrifice worth it.  Here’s just a few observations from the weekend (no large race report) on Arizona and triathlon in general.

If you haven’t done this race before in the last 2 years of it’s existence I’d highly recommend it as a late season option.  Drivability is a huge plus, hotel’s are inexpensive, it’s mostly flat and the 3 loop, 60+ turn course make it more fun than annoying.  One overt observation as it almost cost me my race is navigating the roads to find parking the morning of was perhaps the hardest I’ve ever experienced.  Waze told me the 1.1 mile drive would take only 5 minutes but it ended up taking 45 minutes after two large loops of the bike course and no offer of assistance from traffic signs or police.  I’m glad however if it had to happen I’d learn my lesson now rather than on the 19th of November. 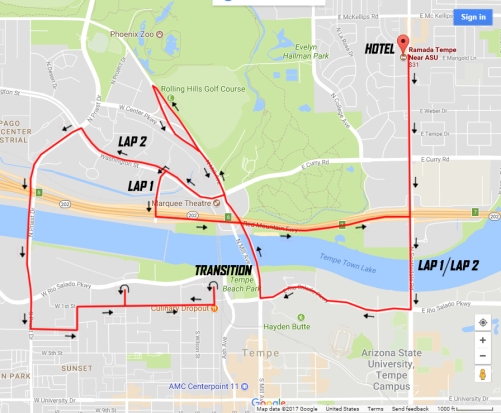 The swim was a non-technical straight forward out and back with only 3 turns.  I found myself on the far left after a brief warm-up (there is no practice swim the day before and you get about 8 minutes to warm-up in the water before your wave).  I did get into a minor altercation in the first minute going over a swimmer’s back to keep from getting pushed left where the guy was grabbing my ankles in retaliation.  Other than that I was able to find open water the rest, finishing 8th in AG out of the water –

Major observation – I heard a bunch of Age Groupers bragging about how nice their goggles were, showing off a cool looking metallic dark tint.  Meanwhile I noticed I was one of the very few in clear lenses despite it being very dark out, the sun not having risen yet at 6:36am.  Know your course for goggle selection.  I’ve found, unless you’re sighting into the sun that clear lenses are almost always the best option.  Especially in a discipline where vision is SO IMPORTANT.

This was one of the most technical courses I’ve ever ridden, having 3 loops including 60+ turns and 3×180 degree hairpins per lap.  The first lap was empty but by the third all the congestion was getting a little dangerous.  It became hard finding a seam into each turn when you’re doing 25+ mph in a wave of 18mph.  All the action made for a good distraction however as the miles went by incredibly fast.  I knew I couldn’t rely on power with all the turns, and I usually go by HR, looking to target 160bpm, but this time oddly enough I just focused on speed, noting I went through the first lap at 23.1mph and wanting to hold if not pick-up the pace.  I might have been able to pick it up if it weren’t for the congestion, finishing at 23.1mph avg.

Major observation – I spend a lot of time on the bike and although it isn’t my greatest discipline I will usually maintain placement in my AG.  On this day I had a handful of AG’rs blow by me on the bike like I was barely moving, especially on the turns.  I saw guys and girls get out of the saddle and hammer the first few cranks around each turn while I kept it smooth and consistent.  I know that this was the right call because after 60+ power spikes I was able to overtake all who had passed me on the bike in just about the first mile of the run.

This run had it’s pros and cons.  I was very excited to take on a pancake flat course and get the experience for the Full running basically the same path.  There was areas of shade and even soft surfaces, which I love!  Support was great on both 6.5 mile laps.  I got good practice with my nutrition.  But, my pace was relatively slow considering.  I started in the 6:20’s and slow down a little for a 6:47 average.  Having run a 1:22 earlier this season I had hoped for at least a 1:25, but imagine my legs were just too fatigued.  I maintained a perfect HR and had nothing left to give.  Relatively though I felt like superman as I was able to quickly overtake the 4 or so guys ahead of me in transition who had blown-up, some well into a death march.

Major observation – Know your ability across the duration.  There is no such thing as a ‘great bike’ if you die on the run.  I almost felt like saying “check out your power” to the guys who sprinted by me on the bike.  The Half is a pretty long race but the Full can become EPIC if you die early in the run (remembering doing a 6 hour walk with my buddy at Texas after we both died in the heat.

I was nervous about heading out to Arizona at first but am now very glad that I did.  Racing is fun and I had a blast out there, regardless of the outcome.  Having done the 70.3 I am still a little anxious about participating in the Full (the more Full Ironmans I do the more I respect the distance) but feel like I learned a good amount to help prepare me.  Perhaps the most confidence came from testing my new Infinite customized blend which left me with zero digestional issues, muscle cramps, etc in a race where many had issues in the heat.   I was able to ride a good portion of the Full course the day before and am excited about it’s speed.  It’s no surprise to me now how so many go so fast on this course.

1 month to go!  Not sure how I’ll net out but excited to get there!!

← Looking Ahead – Ironman Arizona and Arizona 70.3
Looking back on 2017 – Arizona, triathlon and life in general →