This weekends inaugural Escape Surf City triathlon illustrated a unique phenomenon in competition.  My only goal for this event was to race uninhibited by limitations in search of a breakthrough performance without fear of blowing up.  I wanted to plow through the swim as if it was the 1k, race the bike at 300 watts and see if I had anything left on the run.  The reality was after a relatively slow(er) swim, I felt I had a very decent bike (287 watts/24.9mph) and 6:10ish run, coming into the shoot content that I hadn’t left anything on the course.  Then when I saw my place (2nd in AG), and heard that 1st got a free qualifying entry to do Escape from Alcatraz I couldn’t help but feel a little defeated, thinking “could I have gone a little bit faster?”, “I wonder how much I missed it by..?”.  I put on a happy face and congratulated friends on a job well done.

After a couple much needed celebratory drinks in the beer garden I decided to look up my results and was stunned to see a new first in AG ‘David Welby’.  With a big grin on my face I ran over to the timing tent to verify it wasn’t a glitch (apparently the 1st place guy had DQ’d for some undetermined reason).  From that point on I was happy as could be and enjoyed the rest of the morning, celebrating teammate one after another podiuming at awards, before collecting my spot for what I am told is truly a bucket list race experience.

The interesting part is acknowledging how we define success and are influenced by factors outside of one’s control.  This behavior has been ingrained in our minds from years of habit, chasing medals and podium spots at races where you simply don’t know who will show up, or times on variable courses in distance and conditions.  I’ve had PR races where I don’t even make the podium and sloppy morning after performances where I’ve won.  Outside of all the Instagram views and Facebook likes there are only a small sliver of close friends/family and teammates who can decipher all the data to see what it really means.

Absent all the deep thought the important thing to note is that I AM HAPPY, and that I truly appreciate those that take the careful time to follow and care.  Racing is such a special gift and it has taught me that though there are vast discrepancies in performance based on age, talent and resources, that success favors the driven and that overcoming pain is a virtue that transcends the race course.  Looking forward to all the opportunities ahead this season, especially the fun events in my near future (Wildflower, Alcatraz, etc).  2018 is shaping up pretty well so far 😊

Uggh.., welcome to the beginning of open water!  I’m just thankful that we’ve had so much race ready experience in the Tower26 program to be conditioned to whatever the ocean can throw at us.  The water was cold, rough and unpredictable.  Watching the female pros attempting to swim up current after being blown off course prompted me to take the initial section well south of straight to the first buoy.  I think I may have overdone it, looking at my Garmin file afterward and because I quickly found myself all alone.  I did however manage the swim in well, being able to stay close(er) to the exit arches while the majority of swimmers were carried down the beach.  I was a little embarrassed to dunk under one breaking wave rather than ride it in, but I won’t be as timid next time.

The stretch into transition was long, and I noticed way more people ahead of me than I was preparing for, which only meant more targets to chase down on the bike and run.

I’ve been growing more and more excited to bike recently.  Though the run is supposed to be my strength I’ve noticed my bike leg being disproportionately faster than my run in Desert Tri and now again in Surf City.  I’ve taken a little time to dial in my fit, have looked to save watts with equipment as best as I can afford and at 165lbs with 290 watts am seeing fairly decent speeds.  Like I mentioned I started the bike slightly behind but made up for it, not getting passed once on either bike or run legs.

I began the leg with data, looking at power and heart rate, but after a first lap on a pancake flat course with little to no wind realized that I was as close to breaking 25mph as I’ve ever been.  So, I turned off all data fields except speed which read 24.9mph at the start of the second lap and decided I’d do whatever it took to crack the barrier by the dismount line.  I rode as hard as I could, which if there you might have noticed by my face, but in the end could only hold on to 24.9mph (guess I’ll have to be back next year to give it another go).

One noteworthy aspect of the bike leg, and let me know if you encountered the same, was that it was on a closed 2 lane (each way) section of PCH, with a 2-loop course for the Olympic, and though there was plenty of room throughout the vast majority of riders, especially encountered on my second loop, chose to ride the center line rather than stay right.  I did my best to yell “ON YOUR LEFT” but often presented with the decision to pass on the right or risk DQing by crossing the white line decided to take the lessor of two evils, passing on the right.  In the future I’d hope the officials would encourage riders over for a safer experience.

Even though the Olympic run distance is only 6.2 miles I made a conscious pivot in strategy, opting to ease into it, hoping to go steady until the turnaround, slowing down dramatically on the sand to protect my body, then giving it all I had on the way home.  From the graph you can see how much my pace was influenced by the sand.

As I approached the turnaround I spotted a familiar face (Reilly Smith) in the not too distance.  Getting off the sand I decided I’d give whatever I had to try and catch him.  In the pursuit I found another teammate (Mauro Domingo) with 2 miles to go, who encouraged Reilly was next ahead.  [Necessary to call out Mauro who has made such significant gains in his racing as indicated at Oceanside and Escape Surf City].   With one mile left I estimated Reilly was about 30 seconds ahead and I buried the needle.  It’s a funny thing how you work your hardest to chase down someone and when you do they generally complement your effort and encourage you on (very friendly enemies on the race course!).  Mauro, Reilly and myself all finished within a minute of each other for 1, 2 and 3 AG spots. 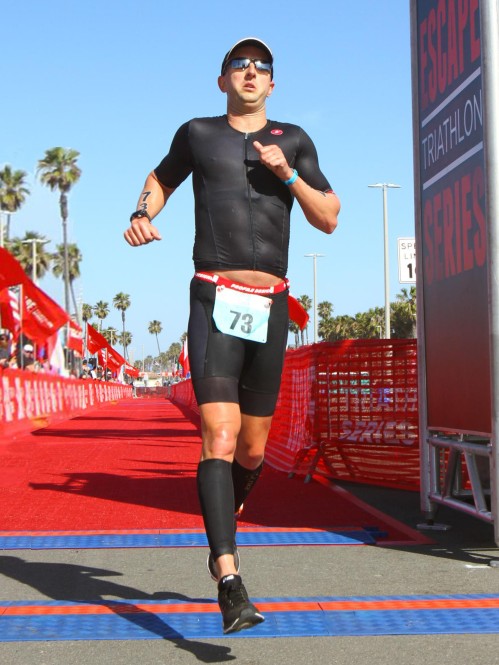 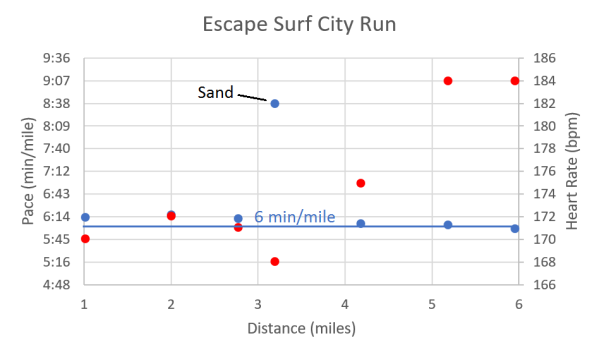 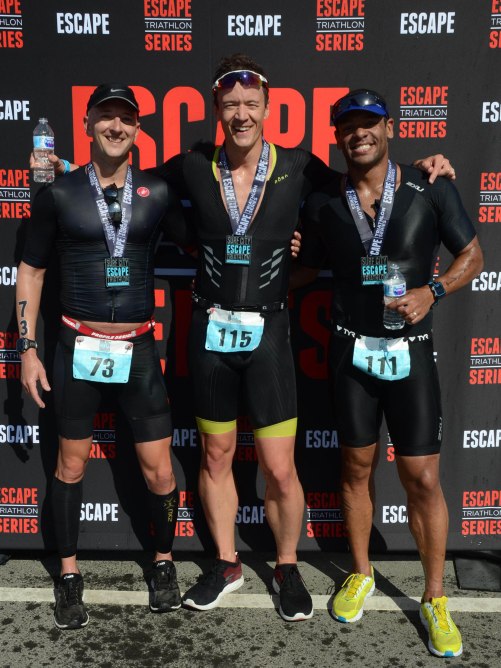