As I sit down to write my 5th Oceanside race report having competed in the 70.3 distance each of the last 5 years I am compelled to mix it up a little.  Consistency is perhaps one of my greatest strengths to the extent of monotony as evident by my performances at this venue over the last half decade with no more than a 2% spread in outcomes –

Not to diminish the significance of a few minutes over a 4.5 hour race as they often make the difference between a podium, qualifying spot or going home empty handed, however I no longer feel obligated to get into the nuance of how I again swam 30 minutes, biked 2.5 hours and finished with a sub 1:30 run.  Instead I would like to focus on a couple of themes leading into race day that contributed to whatever success I achieved and have greater reach than the simple scope of triathlon.

#1 Trust Yourself – Ever notice the more people you ask for input the more diverse and often disparaging remarks you’ll receive??  No example is more glaring than the comments thread of a triathlon forum, but even highly regarded coaches and programs have opposing views on prototypical themes when it comes to the sport of triathlon.  I’ve paid enough money to coaches in the past to know the biggest ROI is not around things going well but knowing what to do when things go wrong, life goes off the rails or injuries surface.  I pour my heart into my passions and as such equal to the glory of achievement is the weight of burden when things don’t go according to plan.

Earlier this month, heading into my final build towards Oceanside, I was asked to go to Hong Kong for work on a 10-day excursion that made exercising very difficult, perhaps counterproductive.  No surprise with a 24-hour trip home and compromised immune system that my return to training was met with a cold.  I had to make the difficult decision of either training through at the risk burying myself into a hole or backing off to go into race day well under-prepared.  In years past I would have reached out to a couple coaches and friends, possibly posted something of Facebook and stressed about my decision leading to even more trauma.

Education is incredibly important but the teacher’s job is never truly done if the pupal must always rely on them.  I’ve come to learn the right decision doesn’t necessarily mean the best outcome, but that once you make a choice you’ve got to see it through and not look back.  I’m building my confidence around this decision-making paradigm and have noticed that with that confidence comes support as well as results.

#2 Take Care of Yourself: (body and mind) – With age I’ve grown to appreciate and respect my body more.  You really have to if you want to get longevity out of it, as echoed in particular by a significant number of friends sidelined due to injury leading into this 2019 season.  I’ve also refined my perspective from a mental capacity to push competitively as you never want a hobby to feel like a job.  Both of those stated I now follow a few logical yet perhaps understated guidelines that have kept me healthy in both mind and body –

Recovery – Prioritize sleep, eat well, everything in moderation when it comes to junk food and drinking.  Also, forget all that and have fun, cut loose, make bad decisions when the opportunity presents itself.  You’ll regret the things you didn’t do more than the things you did.  Own your decisions.

No big changes – year after year, week after week.  Whether it’s season planning or going lighter in the gym but still showing up on race week.

Backing off – when it stops being fun it’s ok to skip or drop out, even pass on a race you’re not feeling.  Small breaks only fuel the fire.  It’s all about the long game.

Seasonal Focus – Though I love the sport of triathlon I realize it’s effect on my body, from running in particular.  This year moving forward I am adhering to the difficult decision to limit my competitive running to no more than 6 months out of the year.  This will no doubt slow me down a bit in the short term but I am confident it will keep me going healthier in the long run.  Additionally, I look to supplement with a heavier swim and bike specific load, as well as strength and flexibility focus particularly in the 4th quarter.

#3 Work Easier Not Harder – There is a mantra I repeated in my head on my last set of mile repeats at the track as well as the front half of the Oceanside run.  “Go easier not harder”.  I feel like the more you get to know your body the less likely it becomes you can will it to do more work, however you can often get more performance out of the same effort if you can step up efficiency.  On the track, if I can focus on mechanics I notice a consistent 10 seconds per mile improvement with no increase in effort.  One of my favorite Tower26 stories I’ve heard multiple times in the past is of Gerry’s hour swim record attempt where he talks of constantly counting strokes per length as an indicator of efficiency drop.

In the morning they said they were measuring the waves in inches, not feet.  They lied!!  Not that it matters for all the race specific training we do but there were some gnarly faces to contend with.

Took it easy through the surf, drafted off some buddies in the harbor, finished with a underwhelming but respectable 31:05.

Lot of drafting going on out there.  Had a lot of friends receive penalties.  My road rage on the streets of LA carries over to the bike, keep your power target, stay away from me and don’t F’ing draft!!

Just like all previous years I never take lap 1 hard, settle in to manage expectations, run the inclines and declines super easy and let it rip on the last 4 flatish miles after the final descent down to the bike path. 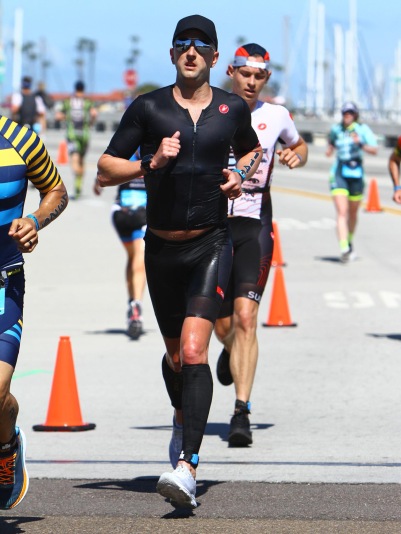 In my mind I’m going deeper, but the splits keep even as my HR soars.  Like I said “run easier, not harder”.  My strategy worked as I chased down a podium spot (18 seconds!!) with the help of updates from friends. 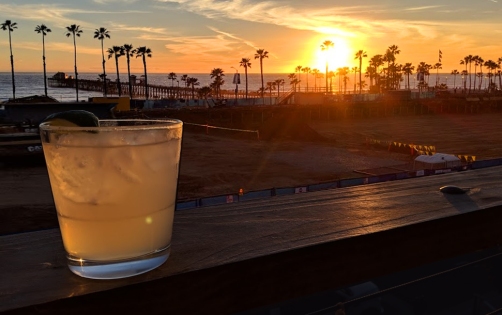