People often ask me, “What’s your goal time for Placid?” My response continues to be the same. I don’t know. I think it’s foolish to make a prediction on something with so many variables out of your control and that’s so far away. I’ve seen it before, and in the end no one remembers what you say you should have done, only what you did. My goal for 2011 was simple, to make it to the start line healthy and uninjured. For 2013 my goal is a little different, but not by much, to do every workout in prescribed zones, practice proper fueling always, remain diligent on nutrition and let my training speak for itself on race day. With less than 3 weeks now until the start of race season 2013 I’d like to take some time to reflect back on these last 6 months and the progress that I have seen through QT2.

No one ever said, when referring to Ironman, it’s all about the swim.

As a triathlete swimming is my Achilles heel. It’s what separates me from the next level and serves as a short course barrier to the podium. A conscious decision was made way back at the end of 2012, with this in mind, to limit my volume in the pool to allow more time to build strength on the bike and run, the heart of Ironman. I would love to have been getting in laps with my coach 6 days a week, like the Hansen’s and Coach Mary Eggers in Rochester, but that simply wasn’t in the cards. Instead we traded quantity for quality and the results, though mild, have been better than I expected – 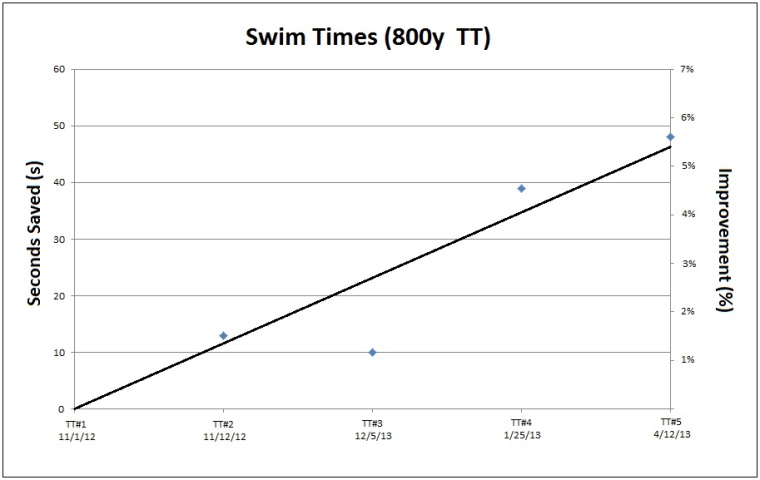 I purposely didn’t include any times because to be frank I’m still embarrassed by my swimming ability.  I’d like to focus on how far I’ve come, not necessarily this point in time. The fall after Lake Placid 2011 where I swam a 1:10 I got in the pool and struggled to maintain 2:00/100m on a 1000 meter TT.  Today I swim faster on my easy recovery swims and thanks to dedication to form my stroke has progressed significantly (still much room for improvement).  Bottom line is I don’t have to swim ‘fast’ to achieve my goals, as the swim is roughly only 1/10th of the event.  If my improvement in the last months translates to my time I will be more than satisfied with the few minutes saved.  As encouragement I will be thinking of QT2 Pro Athletes Jessie Donavan and Jennie Hansen as I go into T1, who were the last pro’s out of the water in Placid but finished 1st and 2nd respectively overall.

Biking has undoubtedly been my main focus this winter.  Tabata intervals, high zone work, long rides (with an emphasis on the LONG) and running off the bike.  I can clearly remember a conversation I had last season when I was bragging, having just completed a 3 hour ride on the trainer, which at the time was a significant accomplishment.  I was told by a rodie that you don’t need 3 hour rides to maintain fitness on the bike through the winter, and perhaps my coach was in tune with this advice because I wasn’t prescribed any 3 hour trainer rides on my long days in 2013.  Instead my calendar was replaced with 4+ hour rides, my shortest being 3:31 and longest 4:42 (8 out of the last 10 at 4+ hours).  Of course there’s a little divisional factor for trainer rides vs. rode but for the purpose of Facebook and blog posts I prefer not to mention this.

In 2012 I rode 3 days a week and did one brick a week, if that.  In 2013 that number was bumped up to 5 on average (some fewer, just completed my first 7 day brick last week).  In addition, every one of my long rides was preceded by a run.  Here’s a small snapshot of what I’m talking about with the month of January –

I’m not sure exactly how much my biking has progressed.  It is difficult to tell for sure having been indoors and with variance in equipment and power output.  Below is a comparison of a power test data over my last 10 months –

I’m not quite sure where I stand today as a time trialist but I am overly confident that it is leaps and bounds from where I was this time last year.

I find it a little shocking but not so surprising where my run is having been prepped in advance by a fellow QT2 athlete who told me after a season with the team she was running faster through the half marathon in a 70.3 than she was running open in college (at a D1A program).  My mileage has decreased substantially since college, but my times are just as competitive.  Unfortunately I don’t have an exact race to show this progress but I have many sources of data to support the claim.  I ran a cold and blustery off season 10 miles at the Y10 in 0:57:57 (5:48/mile) compared to 1:01:12 last year.  Despite a late start I finished the Shamrock Run in 26:48 chip time (1:12 late to the starting line of a 5,500 participant race!), which is comparable to what I was racing in college.

But my main source of encouragement is a trend, not a race, as I’ve learned very quickly that it’s not about running fast, it’s about lasting in the endurance world.  A sub 16 min 5k means nothing at mile 23 of the marathon almost 10 hours into a race.  What I have seen is a drastic swing in zone performance.  Here is a comparison of Sunday long runs over a period of just 3 months –

This winter the run has been all about building durability.  Unfortunately I won’t know exactly how I stand until July 28th but I am confident and anxious to finally recognize my true speed potential at this distance.

Fueling has been one of the easiest adjustments to my training, hitting my wallet harder than anything else.  It can be expensive to take in performance drinks, gels and recover fuel the way you would on race day in every workout but the effect has been monumental!  I used to be exhausted after a three hour ride, often bonking, whereas today I can get off the bike after 4+ hours and go out for a 50 minute run, feeling perfectly normal afterward.  I’ve been told that for true Ironman training it is not just the work but recovery that truly makes the difference and I know I could not do this without the proper aids.

Practicing proper nutrition is another story completely!  To maintain the correct caloric intake I’ve reverted to eating the same things day in and day out for as long as I can remember.  Pork/asparagus/potatoes, turkey/brussel sprouts/yams, chicken/brockly/pasta, and on Friday afternoon Zetti’s pizza, my only junk meal.  The meals aren’t that bad as I look forward to them every night at 11pm post workout.  What’s hard is my breakfast smoothie every morning, can of tuna every afternoon, drinking enough water and my least favorite of all triple strength fish oil, not for the taste but fear of death every time I have to swallow another mammoth pill.  I’ve upped my protein amounts 3x that of a normal person yet am still struggling to maintain weight (goal body composition being 8-9% body fat at 160lbs). 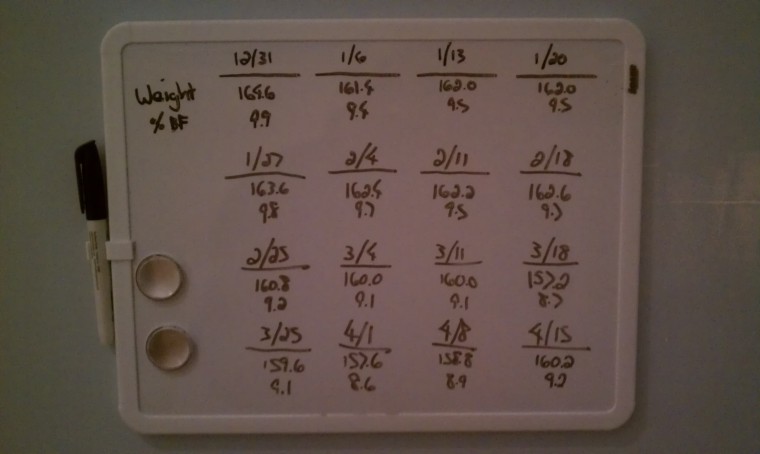 This category is a little hard to gauge but to do so I look at my reaction to the volume; uninjured, feeling strong and maintaining weight.  I don’t look as muscular as I used to but in the endurance world power/weight is key and excess muscle provides no benefit other than picking up athletes at the post race party.  I’m actually very happy with my body composition compared to where I was previously, but still look to build lower body strength in the following off season.

Where do I stand going into race season 2013?  I have no clue!  I am very excited to see how all the hard work will translate.  A few months ago my coaches made a prediction where I would be in Placid based on performance indicators and today, 14 weeks out I am already ahead of all three of their projections.  It’s a nice feeling at this point in the year to be completely reassured that I am headed in the right direction.  Thanks Vinny, Michelle and QT2 for getting me to where I am, and best of luck in taking this all the way to the finish line!