It’s about time I wrote this race report, going on a week since I participated in my first triathlon of the 2013 season, the Bassman Half Ironman.  It’s also about time I wrote a race report for an actual triathlon, as I was beginning to forget what all this training was for.  Reading friends recaps of San Juan and Galveston had me worried that I was getting behind, but Bassman turned out to be an excellent introductory experience to get the rust off and see where I’m at after a dedicated winter training with QT2 Systems.

It was an interesting weekend for sure.  The race was located in Bass River State Park in NJ, which is pretty far north for a May race, while most are traveling south to Florida, Texas or further to get early season competition.  One positive is that New Jersey is drivable, as I continue my poor man race calendar of triathlons within driving distance (excluding Vegas).  I was also able to use this as an opportunity to visit friends and family stopping in Philadelphia on the way down and Westchester after to spend a day with my parents.

I rented a car from Hurtz to prevent putting over 1000 miles on the Jeep. The difference in gas mileage, 40mpg compared to 20mpg almost covered the rental cost.

As I drove down to Philly on Friday I noticed my drive time creeping up, from 3 hours to 3:15, 3:50, 4+, and as I got closer I found out why, a Winnebago had caught fire closing down the thruway, so my restaurant dinner with friends turned into a fast-food rest stop instead (not the best prerace carboload option).  I made the best of it though combining slimy old pasta from a pizza place with Roy Roger chicken tenders and tomatoes from the condiment isle, along with pretzels and Gatorade from the gas station. 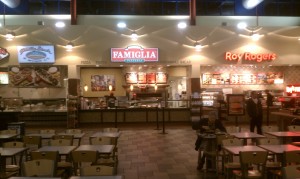 Not the best options

I decided to camp to save money.   The park which was the race site had lean-to’s that were inexpensive and far closer than any hotel.  Only problem was although the weather had been nice that week at night it got VERY cold and I had to wake up multiple times to throw more wood on the fire experiencing several cycles from sweltering hot to freezing cold.  In addition I somehow failed to realize while packing that when camping you need a light source at night, which prompted a forced bed time of 8:30pm. 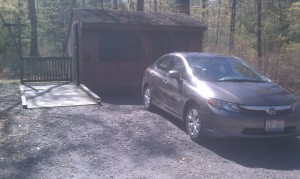 Even with a super early bed time and frequent wake ups to pee and change the fire I somehow managed to sleep until 6am (almost 10 hours!) which ended up providing nowhere near enough time to pack up the car, eat breakfast and drive over.  I didn’t enter transition until after the race was supposed to have started with the sprint but fortunately everything was behind and my wave was delayed by almost an hour, which was particularly great because I had forgotten my gels in the car.  It was a surreal race start as people were walking in and out of transition throughout.  Even at the end no one checked my number as I walked away with thousands of dollars of equipment, presumably my own.

The temperature at the beginning of the race was in the high 40’s to low 50’s with a water temp of 62, which felt pretty warm.  My instructed swim plan was to go out hard the first 400 yards then settle into my pace for a split of 31:30-33:30, my previous swim PR being 34:19.  This was my first open water swim of the season and although I am pretty comfortable in the water I ended up getting a little flustered at the start, having difficulty breathing, and even had to stop for a few seconds to regain my composure.  After that I started passing people pretty easily.   It always bothers me when people go out too fast.  In the entire race I was only passed by one person, an intermediate distance racer on the bike, which means many people were doing something wrong.  I exited the water in a time of 31:37 (I guess the course was a little short but I’ll take the PR).

My bike goal was to maintain an average HR of 159 and lock into my power after 15 minutes or so.  It was my first time racing by HR and I loved it!!  I experienced an issue at the start of the bike, the same as in my last race where a muscle in my hip felt like it was pulled, making it very difficult.  At first I thought it was the end of my race but the pain diminished over time and eventually went away.  I think it might be tied to the cold weather conditions as they were the same as Muskoka where it happened last time.

Overall I was pleased with the execution of the ride, although not so much by the pace.  It was a flat course but there was a good amount of wind.  I had gone faster in my century a week earlier at a Z1 effort but who knows, that’s racing.  I managed to pee 3 times, at the same downhill on each lap, also coincidentally the same part where my coach passed me each time in the opposite direction.  My least favorite part was a section of road with consistent pavement separations, bumps, which are not fun on the crotch.  Otherwise it was a nice scenic ride.

The run was my desert in this race.  I had been itching for an opportunity to push 13.1 miles, coming off some really good training runs, and was dying to see what I could do on a flat course.  Unfortunately running off the bike was very difficult, for more than just me on this morning.  The cold combined with being in aero tightened up some muscles and reduced my stride significantly.   The plan was to go out in 6:15 and hold a HR of 169.  I went out in 6:09 but with an average HR of only 155bpm and from there decided to go solely on feel.

Where most half distance triathlons have me counting the miles down, wishing for it to end and constantly questioning if I can do it, this was very different.  I was actually looking forward to the next mile, in my mind thinking ‘ok, after 3 I’ll test the legs’, ‘after 10 I’ll open it up’, and finally ‘I wonder how fast I can go in the last mile’.    It was as if the whole course was a downhill.  I’m happy to feel like I am finally recognizing my speed potential in the run and excited to see where it will go from here, sub 6’s???  My only complaint on the run was that the course was not clearly marked.  I went the wrong way more than once and there was a moment in the race where I had to ask a traffic cop “is this where I go?” to which he replied “I think I saw some runners go that way” (very encouraging!).  I also despised running in sand for part of the course, twisting my ankle when I looked up to wish a fellow QT2er good luck.

Transitions – These were simply terrible.  I took a combined 4:30, much of which spent putting on arm warmers and gloves (2 minutes slower than the competition), but for this race I wasn’t concerned about taking my time in transition.  This race was more about data, on the bike and run, and I wanted to make sure I had everything I needed out there.

In the end I was very pleased by this performance.  It’s a 13 minute PR from last year, a sign that I’m headed in the right direction, but there’s still plenty of work needed.  I consider myself a good runner and aspiring triathlete yet I wasn’t the fastest runner out there.  It takes a solid swim, nasty bike and holding it together for a strong run, the complete package, as was demonstrated by Matt Curbeau with a winning time of of 4:10.  I’m a long way away but I feel this race shows I’m headed in the right direction.

I should also add that this was my first race since joining QT2, a team race, and a very good experience.   It was nice to have so many teammates on the course and supporters in the crowd.  In addition it was an awesome first to race along side my coach Vinny Johnson who absolutely crushed it, just seconds behind Curbeau!

← Progress
California: The Next Chapter →